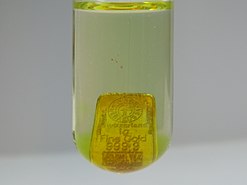 Corrosion is a fate that almost all metals have to face, but depending on the corrosion-resistance of a metal, this fate may come earlier or later. Among the commonly used metal materials, the corrosion resistance of titanium is definitely the best.
There was an experiment in which an aluminum plate, copper plate, stainless steel plate and titanium plate with thickness of 1 mm were sunk into the sea at the same time to test the corrosion resistance of the four. Flowing seawater contains air bubbles, these air bubbles can cause a corrosion process called "cavitation corrosion", which greatly accelerates the corrosion rate of metals. After several days of immersion, obvious corrosion spots have appeared on the surface of the aluminum plate, and a dark green patina (the main component is basic copper carbonate) has also appeared on the surface of the copper plate, while the stainless steel plate and titanium plate have no obvious changes at the point. After 8 months, the aluminum plate has been completely eroded without a trace, and the copper plate has become dilapidated. After 12 months, the copper plate had been corroded to almost disappear, and the stainless steel plate also showed obvious signs of corrosion. After 4 years, the stainless steel plate has not been able to resist the erosion of seawater, and finally reduced under the scouring of seawater day after day. At this time, the titanium plate that has undergone the same process is still unscathed, as bright as new, and there is no sign of corrosion. Even after another few years the titanium plate will not have any problems. The corrosion resistance of titanium is absolutely impressive.
Only being able to resist seawater corrosion is not enough to tell the power of titanium. Under room temperature, metal titanium can withstand the test of various acids and alkalis, even the most ferocious aqua regia is feeble in the face of the metal. Aqua regia is a mixture of concentrated hydrochloric acid and concentrated nitric acid in a ratio of 3:1. There is also a true story about aqua regia. German physicists Laue and Franck, who were awarded the Nobel Prize in Physics in 1914 and 1925, respectively, their Nobel gold medals were going to be confiscated by the Nazi government. So they asked their Danish college Bohr (who won the Nobel Prize in Physics in 1922) to keep it for them. Later, when Nazi Germany occupied Denmark, follow the suggestion of Hevesy, the 1943 Nobel Laureate in Chemistry, they prepared aqua regia in proportion and then dissolved two pure gold medals in it. In this way, the medal disappeared, thus evading the Nazi search. After the war, the dissolved gold was re-extracted and sent back to Stockholm to be re-forged into medals as they were, and finally returned to their original owners. The corrosion resistance of gold is also very strong which hydrochloric acid and nitric acid alone cannot dissolve it. Only when it is formulated into aqua regia, then gold can be dissolved. However, at room temperature, even aqua regia is still unable to dissolve titanium metal. Therefore, this property of titanium is often being utilized by the chemical industry. Hot nitric acid is highly corrosive, and the chemical industry generally uses stainless steel containers to hold hot nitric acid. However, stainless steel will also be corroded by it, and all stainless steel containers must be replaced every six months. Now, these containers are made of titanium, although the cost is more expensive than stainless steel, but it can be used continuously for five years, and the overall cost is more optimistic.
In fact, titanium is a very reactive metal, but why is it stable in highly corrosive acid solutions? Wouldn't there be a contradiction between the two? The secret lies in the lively properties of titanium. Titanium reacts easily with oxygen in the air to form a very stable oxide film on the surface. This oxide film can prevent the corrosion of external acid and alkali and seawater. However, this oxide film is not omnipotent. If it encounters heated acids, the oxide film will be destroyed, which will lead to corrosion of the metal titanium inside. Therefore, when using titanium products, we should avoid them being exposed to such special environments and causing unnecessary damage.

NEXT:Titanium in salt and desalination industry