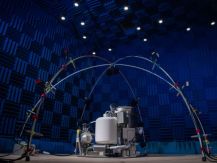 NASA's first new space potty in decades—a $23 million titanium toilet better suited for women—is getting a not-so-dry run at the International Space Station before eventually flying to the moon.
Barely 100 pounds (45 kilograms) and just 28 inches (71 centimeters) tall, the new toilet is roughly half as big as the two Russian-built ones at the space station. It's more camper-size to fit into the NASA Orion capsules that will carry astronauts to the moon in a few years.Station residents will test it out for a few months. If the shakedown goes well, the toilet will be open for regular business.Like earlier space commodes, air suction, rather than water and gravity, removes the waste. Urine collected by the new toilet will be routed into NASA's long-standing recycling system to produce water for drinking and cooking. Titanium and other tough alloys were chosen for the new toilet to withstand all the acid in the urine pretreatment.Remember, no gravity up there so they'll take all the help they can get.The new toilet also improves the pretreat system that's used to collect and treat urine before it's processed and recycled for reclaimed water. If the new toilet's a hit ... it could one day be used on missions to the moon and even Mars.

PREVIOUS:Cat with 4 frostbitten paws gets new feet made of titanium